History focuses on men, but Black women were lynched, too

By Kara NewhouseNovember 10, 2021No Comments

It was a Sunday morning, July 12, 1914. The woman had been in the Elloree, South Carolina, jailhouse since the night before. Soon, a mob would come, put her in a waiting automobile, hang her from a tree and shoot her to death.

Two days later, the local newspaper, The Times and Democrat in Orangeburg, delivered its account under the headline “LYNCHING CAUSED BY BRUTAL MURDER.” The “negro woman” and her sister were suspected of knowing about the disappearance of a 12-year-old white girl and were arrested Saturday night and taken to the jail for “safe-keeping.” On Sunday morning, after searchers found “little” Essie Bell’s “bloody,” “mutilated” body lying near a large oak tree, the mob converged on the one-story, reddish-brick jailhouse and took Rosa Richardson, the “alleged assassin.”

She “confessed,” the newspaper reported, with contradictory statements on whether she gave a motive. The mob hanged her from a tree and fired multiple shots into her body, the “penalty,” for the “cruel and grute-like murder” of the child. Afterwards, the “negress brute” was left hanging, deceased, her body “mutilated with bullets.”

Rosa Richardson is the only documented case of a Black woman being lynched in Orangeburg County, South Carolina, according to an analysis by The Howard Center for Investigative Journalism at the University of Maryland. Nine Black women were lynched in the state.

Between 1865 and 1965, there were nearly 5,000 racial terror lynchings of Black people, according to a Howard Center analysis of the Beck-Tolnay inventory of Southern Lynch Victims and the Seguin-Rigby National Data Set of Lynchings in the United States. Approximately 120 of those victims — about 3% — were Black women.

Recorded history focuses primarily on Black male victims, in part because of the false rationale for lynchings, said Evelyn Simien, a University of Connecticut professor and author of “Gender and Lynching: The Politics of Memory.”

“The master narrative focuses on this great lynch myth that suggests Black men rape white women, for which they stood accused and were tortured and mutilated by lynch mobs,” Simien said.

Maria DeLongoria, who wrote part of her doctoral dissertation on the Richardson case, agreed. “It’s about the racial assumptions and the gender assumptions. … It’s not about Black men being sexual predators, if you’re also lynching Black women,” said DeLongoria, an associate professor at Medgar Evers College of the City University of New York.

Today, the term used is intersectionality. It explains how factors including race, gender, and class are connected when it comes to discrimination.

“They don’t have whiteness and they don’t have a higher socioeconomic status for which to protect them from death, or humiliation or rape,” said Simien, who also noted that Black women’s roles played into some of the accusations. “Black women are typically working as domestics, and so they stood accused of poisoning, murder, theft in the household.”

Richardson was born in 1887, in South Carolina, according to the 1910 U.S. Census, and was 23 years old that year. The Times and Democrat said she was 35 when she died, but the 1910 census record indicates she would have been 27. The census record also reported that she was single and had no children. Her sister’s name was Alice, according to DeLongoria, who researched the case and talked to local residents in 2004 and 2005.

Many newspapers have her listed under additional names: Rosa Carson, Rose Carson, Resa Carson and Rosa Jefferson. In their book “Lynched: The Victims of Southern Mob Violence,” Amy Kate Bailey, associate professor at the University of Illinois at Chicago, and Stewart E. Tolnay, professor emeritus at the University of Washington, wrote that victims’ names sometimes appeared differently because reporters obtained them from a variety of sources. Historians were unable to identify about 1 in 5 Black women victims by name, according to a Howard Center analysis.

Richardson worked for the Bell family, according to The Times and Democrat. Essie went missing July 11, after her father, Daniel Bell, a “highly respected farmer,” sent her out to “graze the family cow,” the newspaper reported. A “slight fuss” days prior between Richardson and Mrs. Bell made Essie’s parents suspect Richardson. 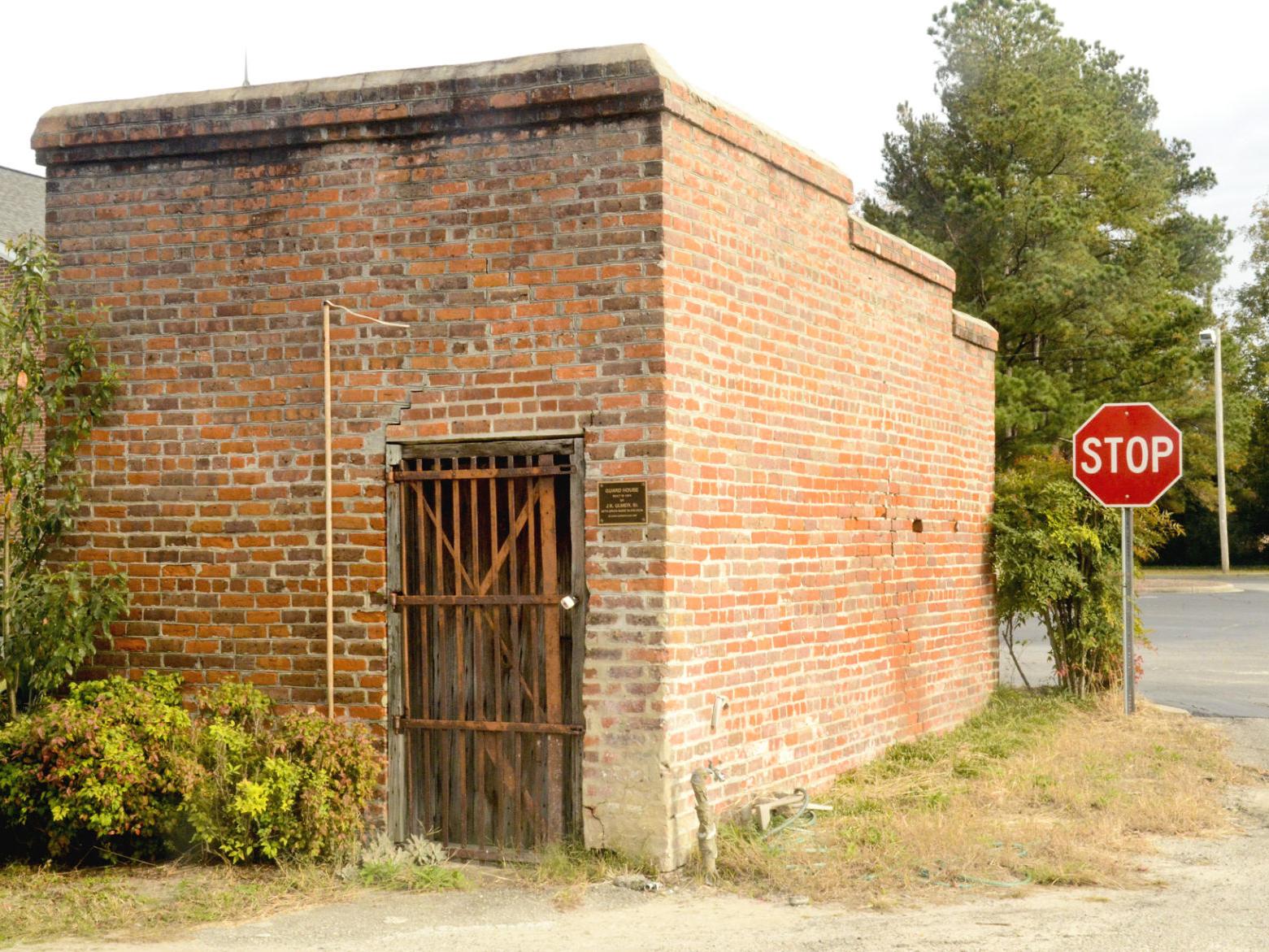 The jail in Elloree, South Carolina, from which a mob took Rosa Richardson before hanging and shooting her. She and her sister had been held inside for “safe keeping’’ while authorities searched for a missing 12-year-old white girl, The Times and Democrat in Orangeburg, S.C., reported. (Photo courtesy of The Times and Democrat and TheTandD.com)

Richardson and her sister were arrested and, when questioned, Richardson told a series of “disconnected stories,” according to The Times and Democrat, which made her more of a suspect. As the search continued, the party tracked footprints from Richardson’s home to the scene of the crime and determined that she was guilty. The search party turned into a mob and headed for Richardson. The Times and Democrat did not report the size of the mob, but The Chicago Defender, a prominent Black newspaper, reported that the mob numbered more than 150 people.

Law enforcement officers and “several citizens of Elloree” attempted to protect Richardson but were held at gunpoint by “six-shooters,” The Times and Democrat reported. The Columbia Record, an evening newspaper in Columbia, South Carolina, reported that her sister, Alice, told the mob that Richardson had confessed. After that, there is no reporting on what happened to Alice.

The Columbia Record also reported that Richardson was hanged from her arms, “maintained an excellent composure,” and showed no “signs of breaking down” before being “shot through the right breast with a shot gun.” She was lynched “almost directly in front of her own home.”

The Times and Democrat reported that “thirty negroes” were in attendance, watching. They would have “fired the volley if permitted, and went to console the grief-stricken family,” the newspaper reported.

“African Americans have a history of donning a mask, showing one face to white people out of sheer necessity to survive the next day,” Simien said. “And so that’s what really comes to mind when I hear what these Black people were saying that ‘they would have participated in the woman’s victimization, torture and lynching.’

“I can’t help but believe they’re saying what white folks wanted them to say.” 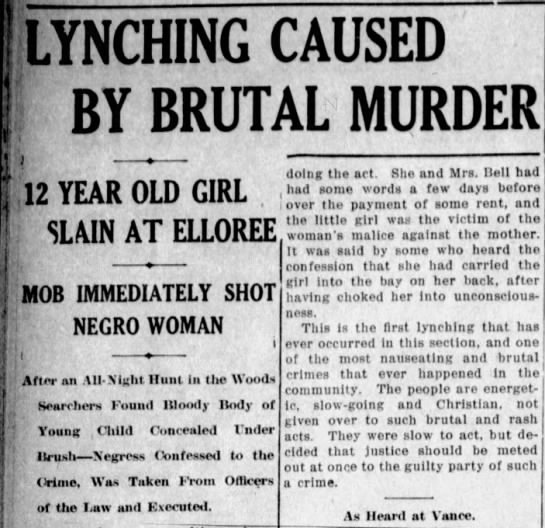 A July 14, 1914, headline from the Times and Democrat in Orangeburg, South Carolina, announces the lynching of Rosa Richardson. The newspaper claimed she had confessed to killing a 12-year-old white girl. (Courtesy of Newspapers.com)

The Times and Democrat reported that no arrests were made and it was unclear who was a part of the mob.

The Times and Democrat of 1914 reflected how some white-owned newspapers of the time covered lynchings. Richardson’s death was printed on the last page of the newspaper’s four-page edition of July 14, 1914. Narratives similar to that coverage were printed in papers across the state, such as The Newberry Weekly Herald, The Laurens Advertiser and Union Times.

White-owned newspapers sometimes vilified Black men and women, calling them “fiends” and “brutes,” and accusing them of having “bad character” or a case of “temporary insanity,” as Richardson was described by The Times and Democrat. The paper called Richardson a “negress brute.” The Columbia Record reported she was “one of the worst negroes of the vicinity.”

African American newspapers that covered Richardson’s murder, such as The Appeal in St. Paul, Minnesota, The Chicago Defender and The New York Age, delivered a different type of coverage. The Defender referred to her as “Mrs. Rosa Carson” and put the story on its front page. Both the Defender and The New York Age condemned the lynching and criticized those involved. The Appeal criticized the African Americans who were there, saying it was a “shame and disgrace to the race” that they “failed to give their lives” to stop the “lynching of one of their women.” 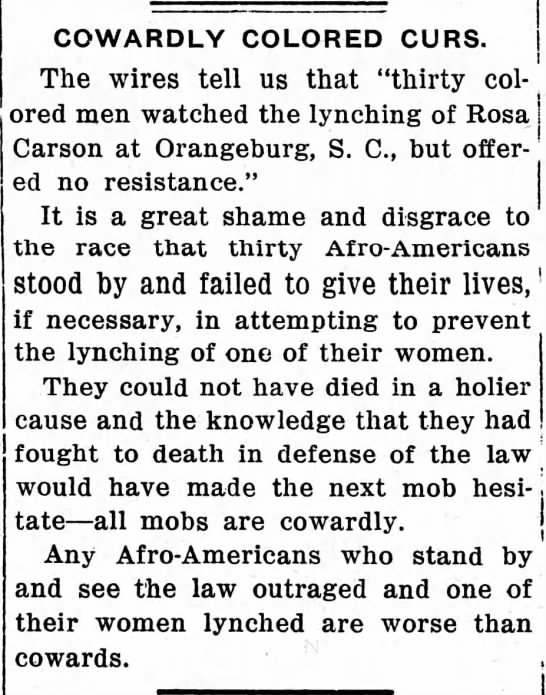 The Appeal, a Black-owned newspaper in St. Paul, Minnesota, criticizes African Americans whom the Associated Press said stood by while Rosa Richardson was lynched. The paper ran this story on July 25, 1914, and repeated it each week for more than a month.(Courtesy of Newspapers.com)

In 1914, the manager of The Times and Democrat was James Izlar Sims. His brothers, Hugo Sheridan Sims and Henry Radcliffe Sims, were the editors. Today, the paper is owned by Lee Enterprises, and the editor is Lee Harter, who has held that position for the past 40 years.

When asked if the paper has reviewed its past coverage, he said, “I think we’ve constantly evaluated how we do things over the years and a definite effort to strive for fairness. That’s been sort of my life’s mission.”

Harter said he’s seen a change in the amount and type of coverage of the Black community.

“In Orangeburg, South Carolina, Blacks are not a minority, they are the definite majority,” he said. “So, you’re going to have, by nature of what people are doing, if we’re reporting on people and community, we’re going to be reporting on Black people.”

In 2012, with the help of historian Richard Reid, the paper revisited the 1914 report of the Richardson case for its Black History Month series. In the introduction, Reid pointed out that the lynching provided a “strange twist to the norm of lynching black men.”

“(Black men and women) were both lynched for doing things they weren’t supposed to do. Opening their mouths in some way, or trying to earn a living or pushing back against the system, or not knowing their place.”
- Maria DeLongoria | Associate professor at Medgar Evers College of the City University of New York

DeLongoria said Black men and women often were killed for the same reasons. “They were both lynched for doing things they weren’t supposed to do,” she said. “Opening their mouths in some way, or trying to earn a living or pushing back against the system, or not knowing their place.”

Today, with movements such as #SayHerName, there is still a fight to showcase that Black women are also victims of police brutality and racial violence.

At the 2016 TEDWomen conference, law professor Kimberlé Crenshaw offered a reason. Crenshaw, who coined the term intersectionality in 1989, explained that frames do not exist that would allow many to understand the victimization of Black women. 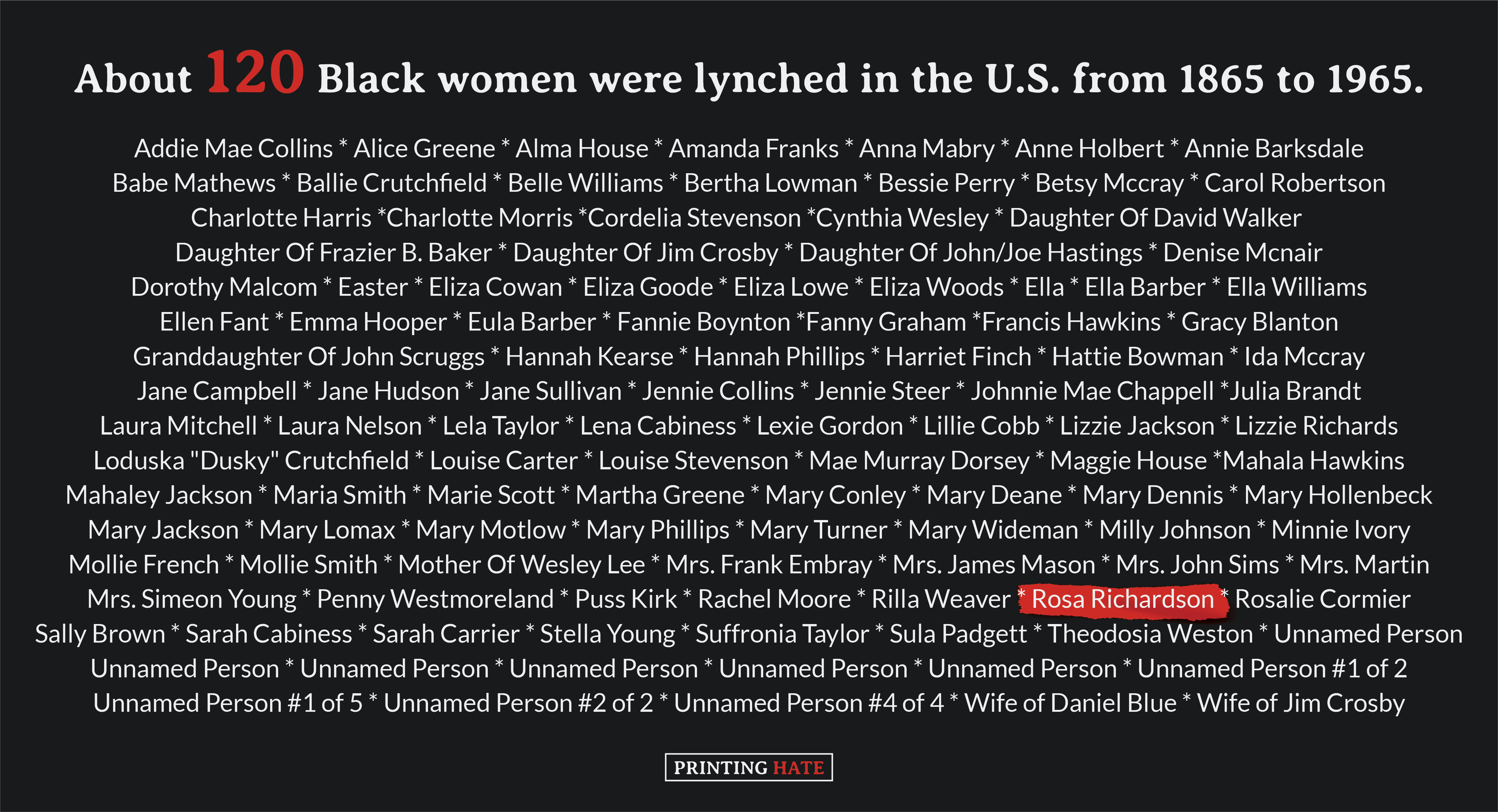