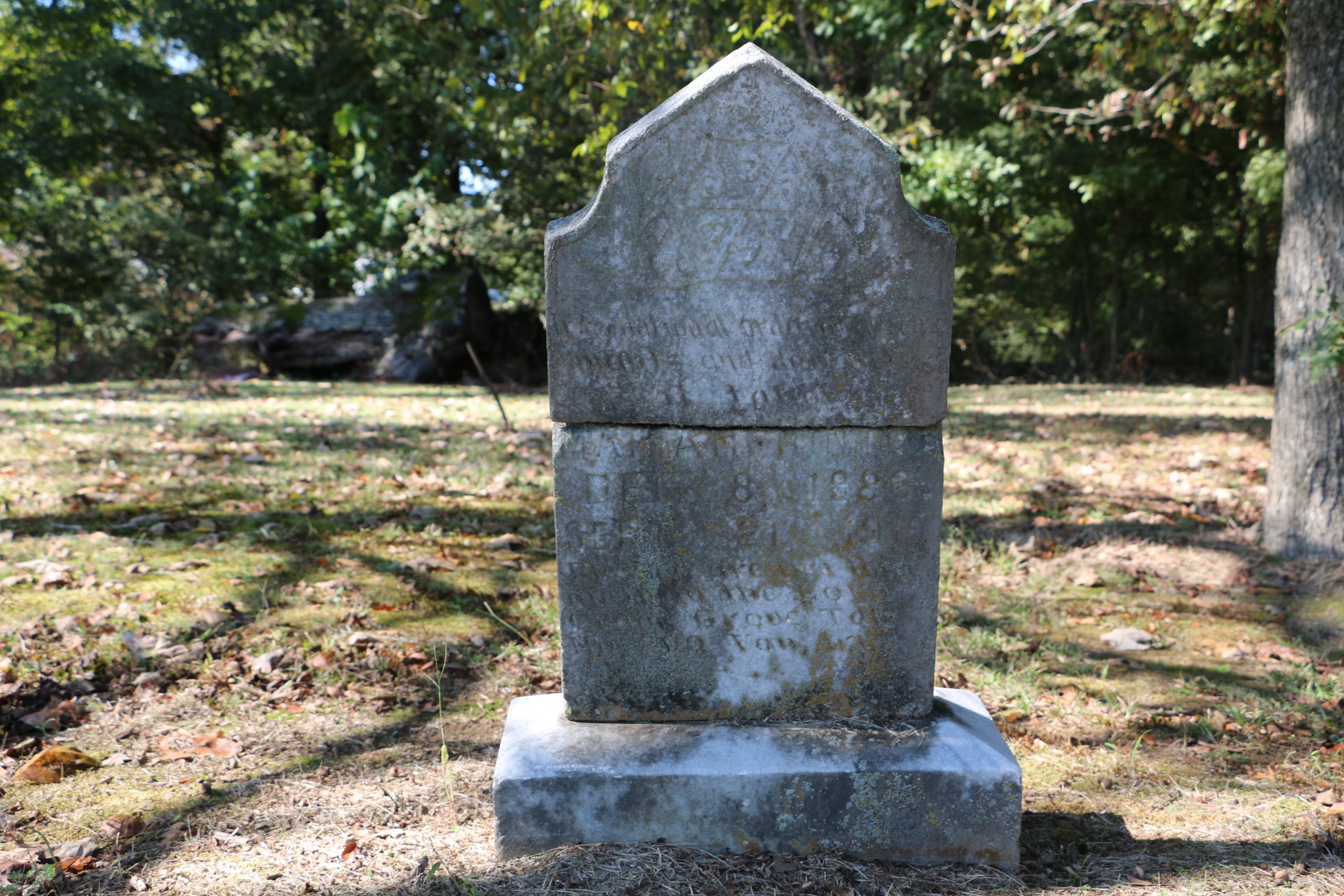 By Molly WorkDecember 12, 2021No Comments

As with other Southern states, the history of Arkansas is replete with examples of lynching. Author Guy Lancaster recorded 365 lynching incidents in the state from 1836 to 1936, a century of racial terror. But without proper acknowledgment, many of these events fade away and become forgotten history.

The St. Charles Massacre is one example: 13 African Americans killed over three days.

In the last century, the St. Charles massacre was rarely acknowledged and had few mentions in publications. Vincent Vinikas’ 1999 article in the The Journal of Southern History,

“Specters in the Past: The Saint Charles, Arkansas, Lynching of 1904 and the Limits of Historical Inquiry,” and his subsequent article in the Encyclopedia of Arkansas, is one of the first and most thorough accounts of the massacre.

“What was astonishing to me was that in all the years after it, not a word had been printed by a historian,” Vinikas said. “No one had looked at this incident, no one tried to figure out how it could have occurred.”

Lancaster has also contributed to the literature on St. Charles with his two books,

“Bullets and Fire: Lynching and Authority in Arkansas, 1840-1950” and “American Atrocity: The Types of Violence in Lynching.” Despite the work of Lancaster and Vinikas, there are many unanswered questions about the massacre, in part because newspaper reporters did not interview the African American community at the time. 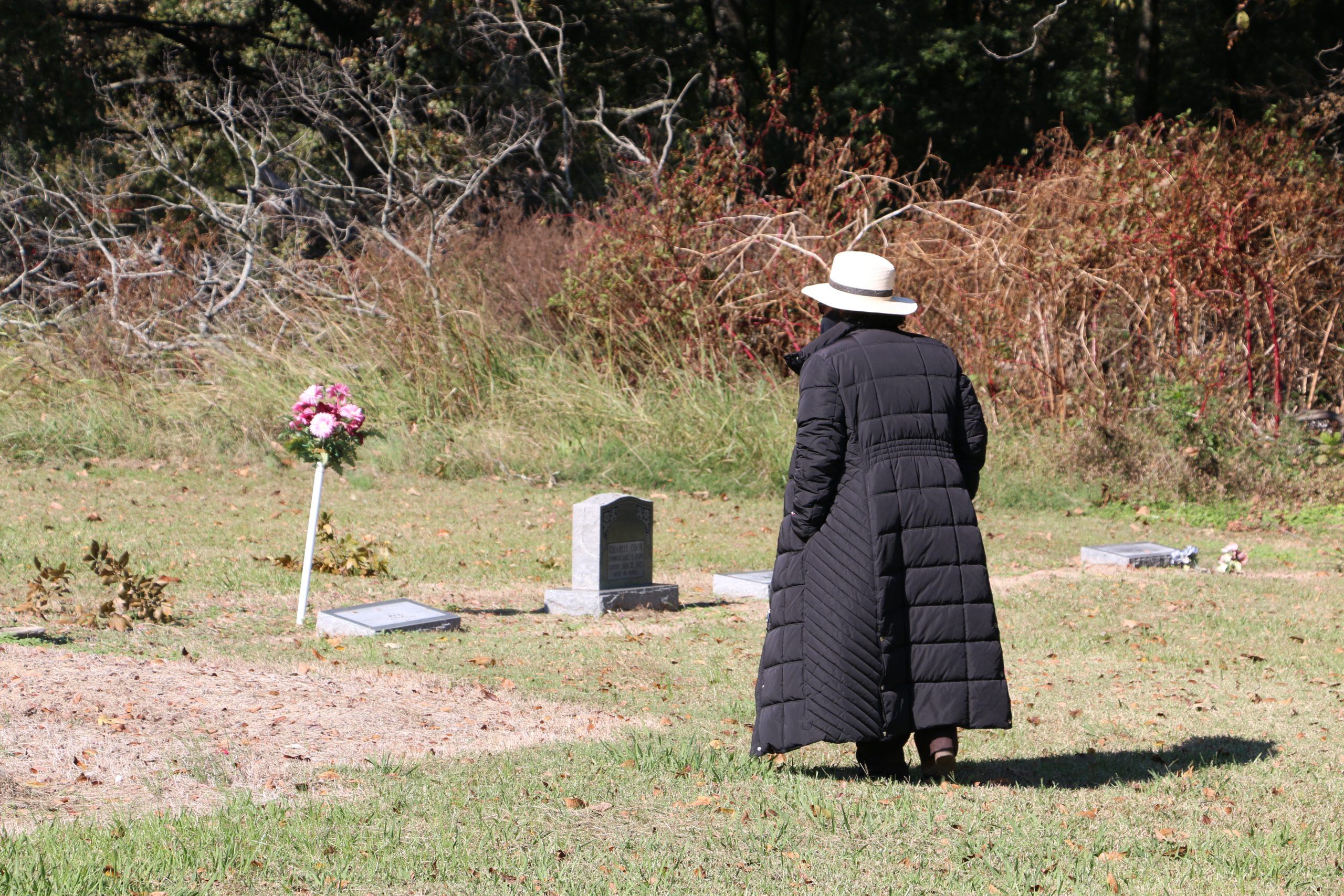 Janice Streeter, in the Hopewell Church cemetery, looks at the row of graves related to Abe Bailey, one victim of the massacre. The church that once was a safe organizing space and place of education for the county’s African Americans no longer exists today. (Mary Hennigan / University of Arkansas)

David Ware, the Arkansas state historian, said that when it comes to an incident like the St. Charles massacre, “It’s hard to interpret an event for which there’ s very little” physical or documentary evidence.

Many things that were once tied to the Black community in St. Charles no longer exist. The Hopewell Church, which provided young Black children with an education and others with a safe organizing space, was removed many years ago. Today, only a concrete slab and remnants of the church cemetery can be found. The headstones, many of them for descendants of the victims of the massacre, have been broken and pieced back together.

Other institutions of Black life in St. Charles are gone. The Immanuel High School, built in 1945 to educate Black children during the Jim Crow era in the South, has also been removed.

Arkansas County once had a large population that was African American – about 31% in 1900 – in part due to new farm workerscoming from states such as Tennessee, Mississippi and Georgia. But by the next census, African Americans were 27% of the Arkansas County’s population, a 13% decrease, while the overall state percentage remained about the same. The county remains predominantly white.

“All the victims were on my dad’s side,” descendent Mitzi Hafford said. “But it affected people on my mom’s side too. Because a lot of them, after the incident happened, they left. They were afraid.”

In nearby Helena, Arkansas, a commemorative piece to the 1904 massacre sits in a storage room.

Drew Ulrich, the curator at the Delta Cultural Center, has not displayed the piece, titled “1904,” since 2019. Ulrich said he believes St. Charles, not Helena, is the most appropriate place for a commemoration of the massacre. Helena has memorialized a separate act of racial terror, the Elaine Massacre of 1919.

Acknowledging the uncomfortable history is “an admission of what occurred, the real horrors of it, who died and how it should emit a message of never ever,  ever again,” Ulrich said.

Ulrich said the white community primarily has crafted the existing history of the massacre. The “1904” artwork serves as a “ kind of a testimony to compensate for the people,” he said.

The artist V.L. Cox created “1904.” She is an Arkansas native who created the piece as part of her “End Hate” project, a collection inspired by human rights and social issues. Before this piece, Cox was not familiar with the incident. She said learning about this history has inspired her to dig deeper into other things that have “been intentionally hidden from us.”

Top Photo: The original gravestone of Mariah Hinton has been incorrectly pieced together with the top of a foreign headstone. The script, although hardly legible, does not match that of the Hinton’s, who was likely a descendant to the victim of the massacre, Aaron Hinton. (Mary Hennigan / University of Arkansas)