Simeon Booker, then a reporter for Jet magazine, was a witness to history on the day in 1955 when Mamie Till Mobley stared at the bloodied and bloated body of 14-year-old Emmett, her only child.

Emmett Till had been visiting relatives in Mississippi, was said to have whistled at a white woman, and, in retaliation, was beaten and shot before his body was dumped in a river. His mother could barely recognize her son. 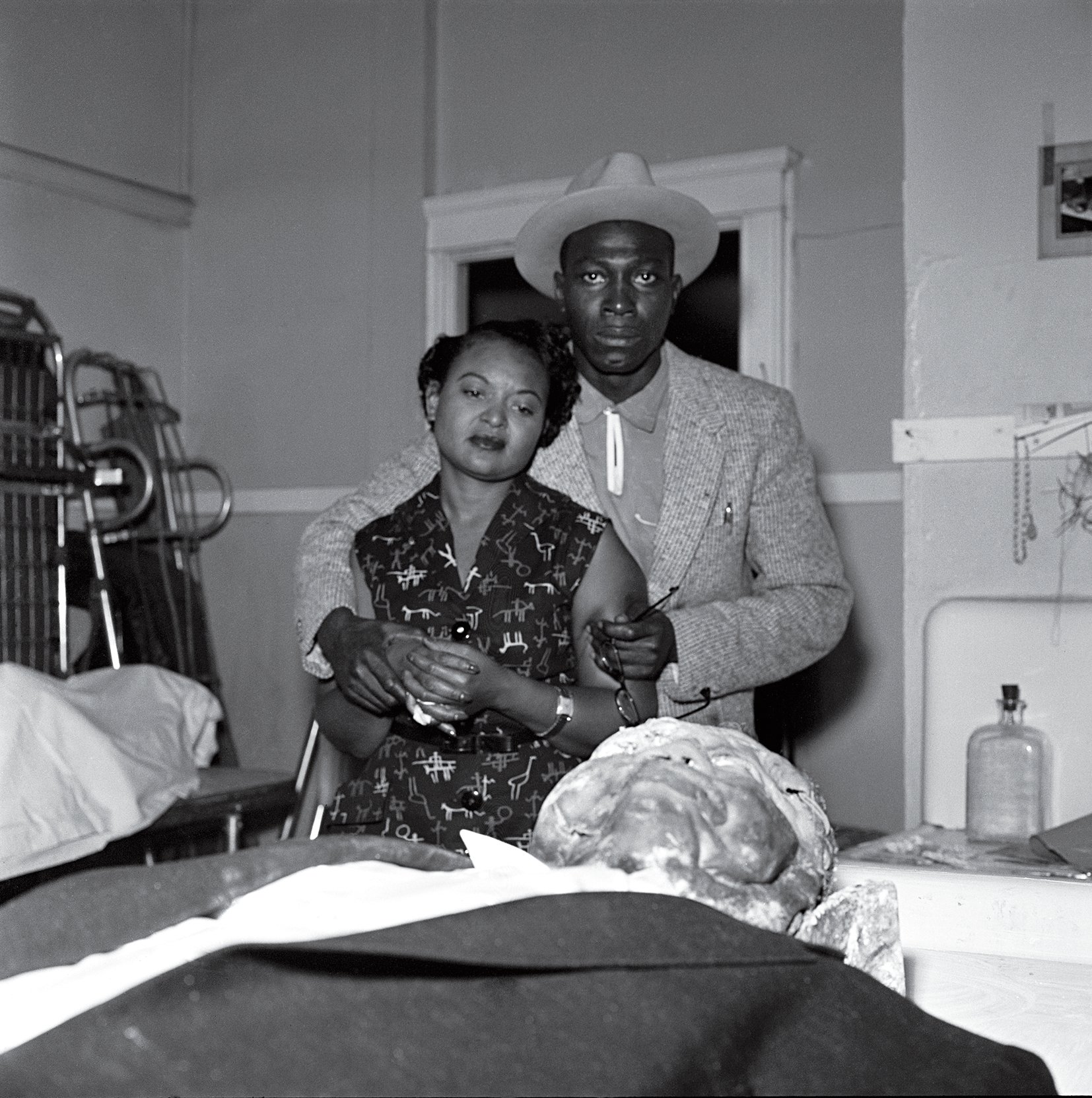 Photo of Mamie Elizabeth Till-Mobley and future husband Louis Till standing over the body of Emmett Till after being lynched. Photo taken by David Jackson Credit: Courtesy Johnson Publishing Company
This photo originally appeared in Jet Magazine.

“Her face wet with tears, she leaned over the body, just removed from a rubber bag in a Chicago funeral home, and cried out, ‘Darling, you have not died in vain. Your life has been sacrificed for something,’” Booker wrote.

The moment was captured by Jet photographer David Jackson. It was one of many images of Till that startled the nation and the world into awareness of the brutality of lynching in America, and, historians say, changed the course of the civil rights movement.

“Without the imagery, there would be no one who’s prepared to believe some of the violence that we’ve witnessed,” Bryan Stevenson, executive director of the Equal Justice Initiative, said in a 2016 documentary.

“That image still has resonance,” he said. “It still has power. I think it still expresses the pain and anguish of a huge part of our population that is still hoping for basic recognition of their humanity.”

Deborah Watts, Till’s cousin and the co-founder, executive director and president of the Emmett Till Legacy Foundation, said the images have a particular resonance in the current climate of violence and racial injustice. 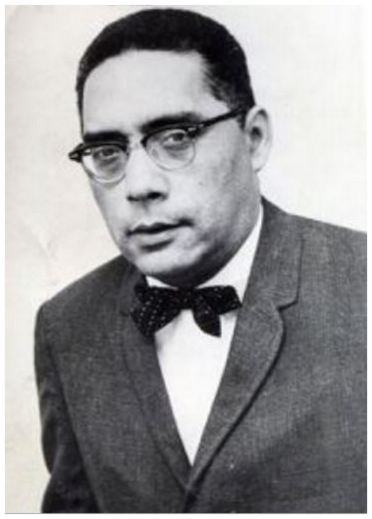 Photo of Simeon Booker in 1957. Image provided by The Afro-American Newspaper

“As people are grappling with Black Lives Matter, here’s a perfect example of how Black lives didn’t matter,” Watts told the Mississippi Center for Investigative Reporting in 2020.

Booker belonged to a group of Black journalists who played a critical role in chronicling lynch law injustice in the middle of the 20th century. Moses J. Newson of Baltimore’s Afro-American was another.

“Both Booker and Newson were members of modern journalism’s advance guard who had dug into civil rights atrocities when no one else was looking,” Gene Roberts and Hank Klibanoff wrote in “The Race Beat: The Press, The Civil Rights Struggle, and the Awakening of a Nation.”

The trial of Till’s two accused murderers took place in tiny Sumner, Mississippi, one of two county seats in Tallahatchie County. Booker was a witness there, too. “For the group of 12 Negro newsmen who covered the trial, it was a bitter, at times frustrating experience,” he recalled the following year in Harvard University’s Nieman Reports magazine.

“As soon as we arrived in Sumner, Sheriff H. C. Strider laid down the law there was to be no mixing with white reporters and any violation meant ejection from the courtroom and town. The day before the trial opened, our Jet-Ebony crew ran into a truckload of gun-bearing whites on a truck near Money, Mississippi, which brought it home to us that our assignment was no good neighbor get-together.

“The Sheriff’s edict further restricted our movement. As a result, we stayed to ourselves in the far corner of the courtroom as the antagonistic Exhibit A of Northern Negro reporters who were capitalizing on low-rating the South. … The white reporters also gave us some tips on conduct in the courtroom. Said they: ‘Take it easy. Don’t get excited. They’re waiting for just one incident so they can pitch out all of you.’”

In a 2013 interview, Booker recalled: “I remember Sheriff Strider, who came into the courtroom every morning: ‘Hello, n—–s.’ And he would turn around and say, ‘Where’s that boy from the little [Jet] magazine?’ And I said, ‘Oh, boy. That’s not my style.’ But I endured it, and it was a very rough experience for me.”

The two men on trial were found not guilty. Racial tension was building throughout the South, and along with it, Roberts and Klibanoff wrote, hostility toward the likes of Newson and Booker.

The animosity seemed to peak in 1958 in Little Rock, Arkansas, at the end of the school year at Central High School, which had been integrated by federal order only a year earlier. Ernest Green, one of the first Black students to enroll at the previously all-white school, was graduating.

“Negro reporters who had pioneered the civil rights coverage found themselves pushed to the sidelines,” Booker among them, Roberts and Klibanoff wrote. “The Negro press was losing not merely its eyewitness position on the story; it was losing the story.”

But that would not be the end.

“Just when it seemed that the mainstream press had permanently eclipsed the black press on the civil rights story, two black veterans of the race beat signed on to cover a form of protest called ‘Freedom Rides,’” Roberts and Klibanoff wrote about events in Virginia three years after Little Rock.

“No white reporter showed up for the trip. … But Moses J. Newson of Baltimore’s Afro-American and Simeon Booker of Jet and Ebony magazines sensed that the rides might be big news.”

Each of the reporters rode on a different bus with a different group of freedom riders on the same route. Newson was on the lead bus. When it stopped in Anniston, Alabama, about 60 miles east of Birmingham, a white mob attacked. Two white state troopers, who had been undercover on the bus, protected the riders from the violence outside.

“Newson had never suspected the troopers were aboard and had never dreamed that Alabama state troopers, of all police agencies, would be the riders’ last line of defense. But God bless them, Newson thought, they were doing their duty,” Roberts and Klibanoff wrote, citing an Afro-American interview with its reporter shortly after the incident.

The bus pulled off only to be forced to stop a few minutes later because its tires had been slashed. It was attacked again, and a Molotov cocktail thrown through a window set fire to the seat behind Newson.

The mob outside tried to prevent riders from leaving the bus, but a state trooper drew his gun and forced the attackers away, allowing the passengers to leave the burning vehicle. “Newson, the last person off the bus, groped his way through the door through blinding smoke, a handkerchief over his face,” Roberts and Klibanoff wrote.

The bus Booker was on had a less-violent encounter in Anniston and went on to Birmingham, where he and others were escorted to safety at a Black church.

Although he avoided the worst on that particular assignment, Booker and other Black reporters developed a repertoire of skills for reporting in deadly territory and living to write about it. Booker had some special ones, The Washington Post reported in its obituary of him.

“For his safety, he sometimes posed as a minister, carrying a Bible under his arm. Other times, he discarded his usual suit and bow tie for overalls to look the part of a sharecropper,” The Post wrote. “Once, in an incident retold when Mr. Booker was inducted into the National Association of Black Journalists’ Hall of Fame in 2013, he escaped a mob by riding in the back of a hearse.”

Sam Lacy, a sports reporter, columnist and editor for The Afro-American, was a colleague of Booker’s and Newson’s, who in another way ventured into areas where white reporters often did not go, said William C. Rhoden, a retired sports columnist at The New York Times who began his career as Booker, Newson and others were in the later years of theirs.

For those reporters, the issues they were covering and the way the Black press covered them were personal as well as professional.

“We investigated these things, like, literally, because it wasn’t theory. It was something happening to us, happening to our community. … It was more than just a story about something. It was our lives,” said Rhoden, who had worked at The Afro-American and Ebony magazine before The Times.

Lacy, who was African American and Native American, saw the Black athletes who at the time had begun to break down color barriers in professional and college sports as more than bodies on a field of play. “They were more than just the stereotypes,” Rhoden said in an interview.

For the first time, Rhoden said, “a lot of white reporters began looking at the Black athletes not just [as] civil rights tokens, but real-life, flesh-and-blood human beings. That’s what Sam did.”

He also covered the integration of Major League Baseball by Jackie Robinson. Lacy and other Black sportswriters endured Southern hostilities similar to those Newson and Booker had come to expect.

“Southern segregationists made it clear they were not welcome: for example, a cross was burned on the lawn of the boardinghouse where they stayed before an exhibition game in Macon, Georgia,” Donna L. Halper wrote earlier this year for the Society for American Baseball Research.

“Lacy was often denied entrance to the press box, sometimes told he had to report from the stands or from the dugout. In one instance, at Pelican Stadium in New Orleans, he was told he could only cover the game from the roof.”

Booker was a first-generation product of the Great Migration, during which millions of African Americans left the rural South for industrial centers in the Midwest. There they formed the advertising and readership base for the growing number of Black weeklies such as the Cleveland Call and Post, not far from Youngstown, Ohio, where he grew up.

Born in Baltimore and graduated from Virginia Union University, a historically Black college in Richmond, Booker had numerous articles published in The Afro-American while still in high school. He worked there after college, then returned to Ohio and wrote an award-winning series on slum housing for the Call and Post.

That earned him a Nieman Fellowship at Harvard University during the 1950-51 academic year, and in 1952 he became the first African American hired as a full-time reporter at The Washington Post. The nation’s capital was not very welcoming.

When he introduced himself as “‘Simeon Booker from The Washington Post,’ people laughed,” The Post reported in the obituary. “If I went out to a holdup, they thought I was one of the damn holdup men. I couldn’t get any cooperation,” he told The Post in another article.

“It was all new to them, having a Black guy in the newsroom,” the obituary reported Booker recalling. “It was recommended to me that I only use the bathroom on the fourth floor — editorial — so I did. I could eat in the cafeteria, and I was thankful for that. But I was always alone.”

He left the newspaper, moved to Chicago to work for Johnson Publishing Company, ultimately opened its Washington bureau and retired in 2007 after 51 years with the publisher of Jet and Ebony. He died in 2017 at the age of 99.

Top Photo: Photo of Mamie Elizabeth Till-Mobley and future husband Louis Till standing over the body of Emmett Till after being lynched. Photo taken by David Jackson Credit: Courtesy Johnson Publishing Company
This photo originally appeared in Jet Magazine.