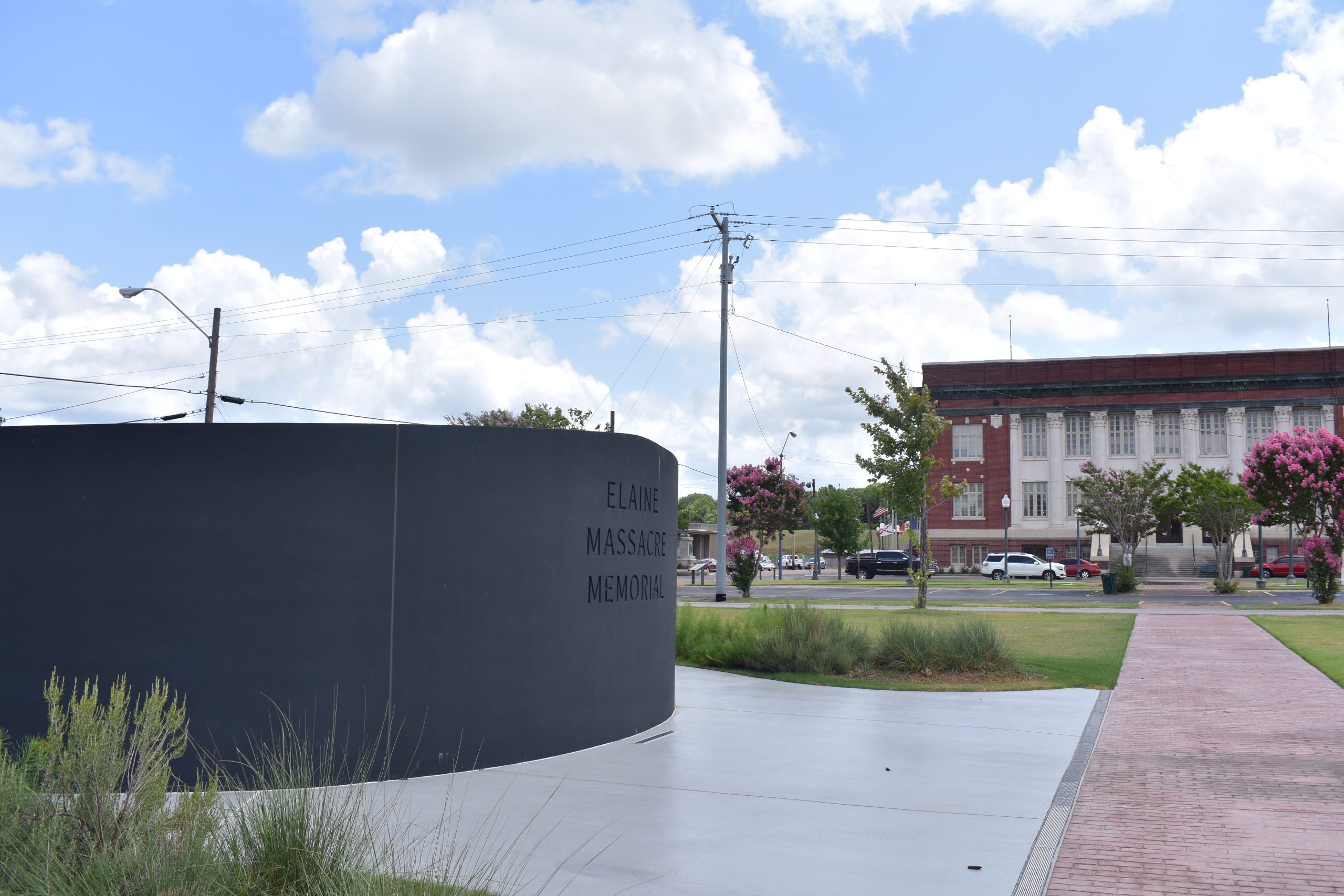 By Jenna CohenJanuary 26, 2022No Comments

James White looked at the barren ground in Elaine, Arkansas, where a memorial tree dedicated to hundreds of Black lynching victims once grew and reflected on his hometown.

White grew up in Elaine, where few talk about the horrific massacre that in 1919 claimed the lives of Black farmers. The willow tree was supposed to provide a place to remember their legacy. Now, it’s gone.

“It looks like a friendly little town, but it’s really not,” White said. The first tree was chopped down, he said, and a second mysteriously died.

The repeated vandalization of Elaine’s willow tree is one of many episodes across the country where memorials honoring the memory of lynching victims have been defaced or destroyed.

In 2020, the FBI reported more than 2,400 hate crimes that involved the destruction, damage or vandalization of property. The majority of reported hate bias incidents were anti-Black.

In Mississippi, next to the banks of the Tallahatchie River, a memorial to Emmett Till has been pierced with bullets, stolen and thrown into the river where Till’s body was found after he was lynched in 1955 at the age of 14.

“Monuments are put up by the people who have the power to put them up at the time.”
- Dell Upton | Research professor at the University of California, Los Angeles

In a series of communities across the country, activists have been fighting against waves of hate centered around lynching memorials.

Historians say these actions reflect the politicizing of America’s battle to reckon with its racist history.

Monuments “are products of historical processes … but in no way are they history books. A better way to think of them is as sound bites,” said Dell Upton, distinguished research professor at the University of California, Los Angeles. “Monuments are put up by the people who have the power to put them up at the time.”

It’s a marked historical pattern, stretching back to the earliest monuments. Many Confederate statues were put up after the Civil War as thinly veiled “political monuments, statements of continuing allegiance to the Confederacy, and to the white supremacy upon which it was built,” Upton said.

When Black politicians and leaders became more prominent during the Civil Rights era of the 1960s, monuments honoring Black history began to crop up across the country, according to historians.

In Tallahatchie County, Mississippi, it took over 30 years after Till was lynched to have his murder acknowledged, said Nancy Bercaw, a curator of the slavery and freedom exhibition at the Smithsonian National Museum of American History. And then it happened only after Black officials were elected to office.

Till’s marker is one of the most publicly and consistently vandalized lynching memorials. The marker has had four incarnations. The first was stolen and thrown in the river where Till’s body was discovered, the second was shot 317 times, the third was shot and destroyed again and the fourth, a bullet-proof sign, was put up in 2019 and stolen in September.

The second variation of Till’s marker is now housed at the Smithsonian’s National Museum of American History in Washington.

“This is the first time that there’s been an exhibit on Till that doesn’t just end in 1955 with his murder,” Bercaw said. “But what we’re really looking at is this longer history of anti-Black violence in America that continues up to this present moment. And I think that’s what the vandalization of the signs is really about.”

The exhibit, placed in front of the Star-Spangled Banner, invites the viewer to reflect on America’s past and how its racist roots still infect American culture today, Bercaw said.

Bercaw emphasized the hard-fought work of local communities pushing to reckon with their racist pasts. In documenting the untold Black stories and hopes, “the Smithsonian can play a role in convening, and in elevating, and in shining a spotlight on this decades-long struggle.”

In Lowndes County, Georgia, a grassroots initiative that grew out of a college class has researched and memorialized a lynching that has inflamed community violence over a hundred years later.

Mary Turner was lynched in 1918 after she demanded justice for her husband, Hayes Turner, who was lynched without a trial. The next day, the eight-months-pregnant woman and her unborn child were dead.

On the same ground, a historical marker erected to honor her memory was shot through so many times that it was beyond repair and cost $5,000 to replace. An 8-foot steel cross looms over the site of the lynching and a new marker was placed in December.

“I think those bullet holes are a testament to the local context that we still live in,” said Mark Patrick George, founder and coordinator of the Mary Turner Project, which closed in December 2021 after 14 years.

The original historical marker acknowledged that Turner was burned and mutilated and how the rampage was part of one of the “deadliest waves of vigilantism in Georgia history.”

“The groups who are engaging in these battles, they have their political agendas, and they want to maintain their position in a system of white supremacy. The monuments are removed but, they find other ways to continue acting.”
- Ana Lucia Araujo | History professor at Howard University.

These acts of violence against lynching memorials serve as “a clear warning” to the Black community that they don’t belong in American history, Bercaw said.

In some communities, monuments have provided a place to congregate and recognize the community’s history of lynching.

In Annapolis, the city’s five known lynchings stretch back to 1875. Over the past several years, citizens, elected officials, activists, community leaders and The Capital, the local newspaper, have taken actions to address the city’s racial history.

One product of the efforts was the dedication of two markers, one in downtown and another at the library in nearby Severna Park.

The original marker was erected in 2019 by the Equal Justice Initiative, a national organization that says it’s “committed to changing the narrative about race in America,” and Connecting the Dots, an Anne Arundel County, Maryland, coalition that works on racial justice issues.

Monica Lindsey, co-chair and founder of Connecting the Dots, said: “It’s important for communities to recognize the history and seek truth, especially if we expect to be able to heal and move forward.”

Historians say monuments are where many encounter history for the first time; they symbolize the prominent figures in society and they make a statement on who writes history.

“Monuments become surrogates … they become ways of talking about things that you’re willing to talk about directly,’’ Upton said. “So, if you’re unwilling to say, ‘Well I don’t think there was anything wrong with the Confederacy,’ or whatever, but you don’t feel like you can say that, you can say, ‘Well this monument is history. We shouldn’t take it down.’”

When different groups of people disagree, monuments can become a source of violence.

“The groups who are engaging in these battles, they have their political agendas, and they want to maintain their position in a system of white supremacy,’’ said Ana Lucia Araujo, a history professor at Howard University. “The monuments are removed, but they find other ways to continue acting.”

In order to reconcile historical racial violence, the conversations surrounding the history of lynchings and how it’s memorialized must continue, Araujo said.

“It’s important then to bring that to light. I think that constructing monuments and memorials is an important step. But the work is not done,” Araujo said. “This is a battle that must remain alive.” 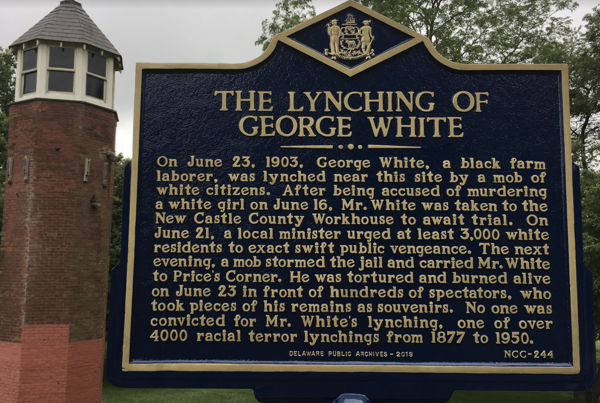